Calling all authors! You may be finding it hard to get noticed by one of the big publishing houses these days, right? Well, a good friend of mine, Jocelyn Andersen, has her own publishing company, and she's looking for submissions. She's a Godly woman of high integrity, and I personally vouch for her publishing company. Let's get good Christian books out there!  Much needed these days.

I didn't know that I could write a book, but Jocelyn Andersen of One Way Press believed I could.

She took a look at my booklet and encouraged me to expand my thoughts into a full-sized book. She secured an editor, and together we all edited the work quite a bit, because I had no idea how a professional writer would express their thoughts so others would read them and take those thoughts seriously.

She chose a style and a cover. When I first saw the cover she had chosen for my book, I couldn't stop laughing [for joy]. I still love the cover as much as I ever did. It was perfect for the book.

It is not easy writing a book, and it is not easy having someone critique your choice of words. But she did it all in a loving and professional way, which made the book a serious work to be taken seriously.

I am grateful for the time she spent, for her expertise, and the ease in dealing with One Way Press.

Jocelyn's backstory on the publishing of Shirley Taylor's first book: Today, Shirley Taylor is a multi-published author with a string of books to her credit. But in 2011, she was a blogger who emphatically stated that she was not an author. She deviated from blogging only once that I knew of; that was when she expressed some thoughts on her subject in writing an off-the-blog treatise. She printed and hand-distributed the treatise as a free fifty-four-page booklet, which she "made the mistake" of...sending to me.

Her subject was women's autonomy. And as I read her booklet, I thought, she needs to expand this into a full length book.

At the time, One Way Café Press was still a fledgling traditional publishing company. But we had published enough of my books in the five years before I received Shirley's booklet, that we could no longer be considered rookies. We knew what we were doing.

I wanted to offer her a publishing contract for expanding her thoughts [from the booklet] into a full-length book. But I felt that if I asked her to write a book, the fact that she could not see herself as an author would cause her to decline.

But I was determined to publish Shirley Taylor and came up with a strategy.

For this situation, I adopted the position that it's better to ask forgiveness than permission. I took license and liberty and did some ghost writing. I expanded on her work and turned her original fifty-four pages into approximately 100 pages. I then bound it into a book and mailed it to her along with a traditional publishing contract for her to sign.

It must have been a stroke of Holy Ghost inspiration that caused me to email her and tell her to expect a package and be sure and have her husband, Don, video her as she opened it.

I instructed her to send the video to me.

Shirley's reaction the first time she sees her name on the cover a book is priceless. That video captured a milestone moment for Shirley Taylor and for One Way Café Press.

Offering our first contract was the second milestone in our publishing journey. The first was publishing my book, Woman Submit! Christians & Domestic Violence. And the third is happening now, as we step out in faith to publish fiction! 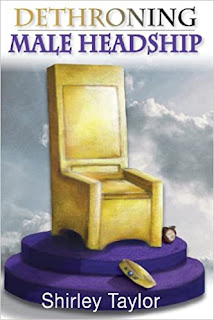 The book-cover [you will see] in the video below, was a prototype, and not the final, published, cover, as seen on the left.

I created the prototype, because I wanted Shirley to see her name on the cover of a book.

I wanted Shirley to see herself as an author.

The rest of the story? She signed the contract. She expanded her fifty-four-page booklet into 192 pages and went on to publish six more books!

Shirley Taylor credits One Way Café Press with starting her career as an author...something she never thought she had the talent or ability to do. But we knew she could!

...And God is able to do exceedingly abundantly above all that we ask or think...according to the [HIS] power that works in us!

Shirley's email to Jocelyn after they turned off the camera in 2012: "When I picked up the envelope at the Post Office today, I knew it was a book.

I didn't know you were writing a new book, and I assumed that you mentioned me in the book. In fact, Don and I stopped off at Whataburger to eat lunch, and I told him that people were different in that some wrote books, like you do, but that I couldn't write a book. I was fully expecting to see a book you had written!

This was astounding to me.  I could not believe it.

He had stopped the video when I found the sheet of paper with the publishing contract. Now that was really a surprise. I could not believe you even remembered this little booklet that I wrote.

If I read this right, this is a valuable contract. You are not expecting me to put up any money to publish the book and there will be no cost to me!"

2021 UPDATE: A message to Jocelyn from Shirley: "I am beginning my latest book on my adventures as a street evangelist. Have over 30,000 words so far. This will be my 8th book! I cannot imagine that. Thank you for getting me on this path...I hope you are doing well. I often think of you and am so grateful for your belief in me and my calling"

Popular posts from this blog

I kept always two books in my pocket: One to read, one to write in.  --Robert Louis Stevenson
Post a Comment
Read more